Preston-based Lifeline Language Services has made Finalist in the International Achievement Award at the Red Rose Awards 2017. 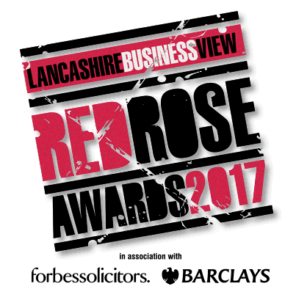 The annual Red Rose Awards for Lancashire Business is now in its seventh year, and is the largest event of its kind ever staged in Lancashire, being named as the UK’s best B2B Awards in 2014.  The International Achievement Award recognises businesses that are trading internationally and promoting the Lancashire message to the world by flying the Red Rose flag in overseas territories.

Established 26 years, Lifeline provides a full range of language services including translation, interpretation, DTP, voiceover and subtitling.  With 13 staff based at offices in Preston city centre, the company maintains a team of approximately 3,500 freelance linguists worldwide covering over 150 languages.

This acquisition allowed Lifeline to take over provision for a number of prestigious French clients in 2016, with services including translation, interpretation, multilingual typesetting, transcription, and multimedia audio-visual services.

Lifeline’s Managing Director Lynn Everson said: “2016 brought many challenges.  The fallout from the Brexit vote remains to be seen, but we’re certainly not waiting around for it and already have substantial overseas development planned. By communicating effectively with our many European partner companies, reassuring them of our absolute commitment to Europe going forward and that Britain will remain open for business, we actually ended up having one of our best years and it’s great we were able to bring so much work into the Lancashire and the North West.

“Achieving Finalist in the International Achievement Award is a brilliant start to the year and we look forward to announcing more good news as the year progresses.”

The Red Rose Award winners will be announced at a glittering ceremony on 9th March at the Winter Gardens, Blackpool.